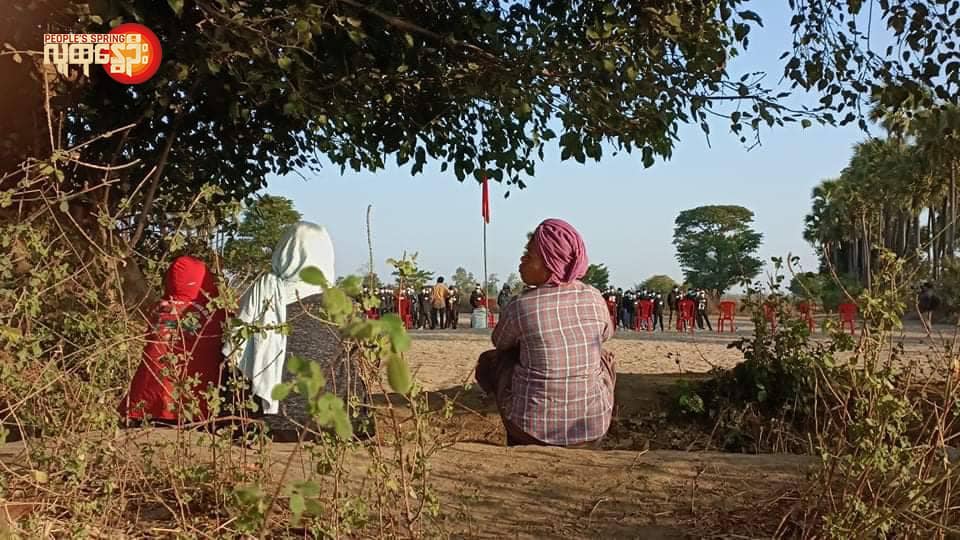 Daw Kyin, who was sitting on her slippers in the dust, pointed at her youngest son among the young people in the line-up. She allowed him, an 18-year-old who had just passed the matriculation exam and was determined to take part in the revolution, to join PDF.

Daw Kyin and I were sitting in the shade of a desert tree. Before us, the red flag of People’s Defense Force (PDF) was fluttering and troop members were drinking oath-water by turn.

I met 60-year-old Daw Kyin briefly while there was graduation of a basic military training in an open space surrounded by yellow hays and tall toddy-palm trees. I was there to observe and Daw Kyin to watch her graduated son.

Daw Kyin, who was sitting on her slippers in the dust, pointed at her youngest son among the young people in the line-up. She allowed him, an 18-year-old who had just passed the matriculation exam and was determined to take part in the revolution, to join PDF.

“I didn’t own an acre of land. I sent him to school while we’re living from hand to mouth”, she said briefly about her tough life.

Daw Kyin had four sons. One of them joined PDF when he went to Myitkyina to work. Another one was now serving in the PDF in an area in Sagaing Division. The youngest son was now in the military training. Another one died very young of an illness.

“He would have joined if he had been alive. The one who died was tall with fair complexion. He would have definitely joined”, she said.

She laughed when I said, “then you must be a mother of good sons”. I couldn’t tell whether she was very proud or sad or lonely. One thing certain was she had to herd her cow. She had to work on the farm again. And she had to say one more additional prayer.

“My sons told me, ‘Mom….let go of us if something happened to us”. She could no longer resist and cried when she said that. I also cried with her. As soon as I arrived in upper Myanmar, I was really surprised to see people who had burning spirit of revolution. Daw Kyin’s spirit was looming high like the plenty number of tall toddy-palm trees and far-reaching like endless patches of hays in upper Myanmar. Every talk by young and old folks, who had lived peacefully and talked about farms and crops, now focused on how to crush the enemy.

It is well known that Min Aung Hlaing’s troops have been terrorizing upper Myanmar brutally. They have been doing all sorts of things: burning people to death, chopping and torturing people to death and mass murdering. Talking this, I asked Daw Kyin, “Do you hate the military?”

As if she had thought it over, she gave me an answer slowly, “I want to eat their livers raw”. I was listening to her dumbfounded.

“I mean I want to eat the liver of their man. I hate them that much”. Daw Kyin was old, unable to hit or punch. How could she fight back the enemy?

How could this financially-unstable farmer support food or weapons? How could she make donations? Instead, she sent her sons to crack down on terrorist soldiers. Then she said she would like to eat the livers of her enemy.

I could not say anything more and fell into a reverie. And I also thought about battles in upper Myanmar. I really wonder if Daw Kyin would cut the liver and eat it when she found an enemy solider on the yellow hays and cracked farms if a series of success would be achieved.