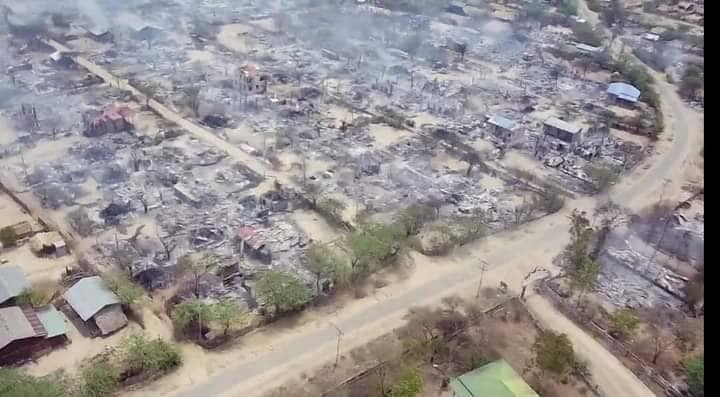 “We can expect rain-sesame as the rains set in early and we can expect winter-sesame when the rains end”, a member of People’s Defense Force and cultivator from Bu Ta Lin Township told People’s Spring.

Terrorist military has been burning many villages in Sagaing Division every day, announcing that it will control the region before the rainy season begins. Sagaing Division that has been facing third attack of terrorist military which gives priority to burning people’s homes than fighting militarily needs more attention and assistance than before.

Farmers predicted that Sagaing Division would have rain regularly this year and cultivations would thrive. Based on their experience, farmers could say this year would have regular rains because previous four years suffered famines consecutively. Now that rains approached some areas of upper Myanmar together with strong winds in May, it could be said that rains have set in earlier than previous years.

“We can expect rain-sesame as the rains set in early and we can expect winter-sesame when the rains end”, a member of People’s Defense Force and cultivator from Bu Ta Lin Township told People’s Spring.

While fighting was going on between terrorist military troops and local PDF troops at the border of Bu Ta Lin Township and Ka Ni on the night of 3rd May, his troops withdrew when it rained with lightning.

“They are launching attacks continuously at a time when it is the best to work for farmers”, he said. If sesame farmers could sow rain-sesame seeds now, they would have loads of money in coming three months of the year, he explained. However, fighting has intensified around their region since the past week and he, a member of local defense force, also could not go back to the field.

Upper Myanmar, which is a major area for cultivation, suffered a great loss in crops because of late rains in the past four years. This year could be predicted to have a good weather in five years, said a retired staff of Shwe-Bo Township Agriculture Department. However, military junta has created raging fires of battles in Sagaing this rainy season.

Since the end of April until today, military junta forces have launched attacks on all areas except the north of Sagaing every day. Because of the attacks by military forces, many villages in Sagaing Division were burned down to ashes at a time good for cultivation before rains fell heavily. All crops stored previous year have been burned and farmers could not think of cultivation.

According to the information from arrested prisoners of war and spy informers, though details of operation are not known, military council has instructed to “clear like sweeping up” some townships in middle and lower parts of Sagaing Division, to have assistance of “air strikes and shooting by ground forces”, to “burn and destroy villages in all townships” and to “take the form of PDF and terrorize”, information groups of PDF told People’s Spring.

Thanks to the strong spirit of revolutionary forces and people, Sagaing Division became a model in Spring Revolution. It responded harshly to Anawrahta Operation of military council from October to December 2021 and operations to control Sagaing Division in February 2022 and before 27 March 2022 (Anti-Fascist Day). How Sagaing Division would respond to the effort to control it in May before the rainy season would be seen soon.

Starting from 27 April, over 90 military trucks from Mandalay left for Sagaing Division and battalions under No.11 Light Infantry Division have been added for Sagaing offensive, according to a local source.

If we look at the figures and news of last month, military council did more burning than military attacks in the northwest plains. According to the figures of burning in States and Divisions released on 1 May by an NGO named Data For Myanmar, 529 houses in Khin-Oo Township and 409 houses in Minn-Kin Township were burned down in Sagaing Division in April. The figures could be higher because internet and phone lines have been cut and information from many areas could not be collected.

In May, military council forces did not give a break since the beginning of the month. It was raining heavily in some areas of Sagaing Division on the night of 3 May. But, the military was shooting at Yar-Taw, Inn-Pat, Kan-Thit and Gway-Kone villages in Khin-Oo Township with heavy weapons constantly and people had to flee in the rain across the paddy fields.

“I will never forget the scene of that day”, said a villager from Inn Pat who has been helping war-victims. His village was burned to ashes by the military at the end of April. While they came back to the village and tried to settle down, military fired heavy weapons at them and they had to flee again. At ten o’clock at night, when it was dark and raining heavily, over 1000 people from four villages including Inn-Pat, relying on the light from their torches, went to nearby villages which were not burned and took refuge there, he said.

“I wish it were a dream. I would like to get back our villages, houses and paddies when we wake up”, he said slowly.

Since villages have been burned down incessantly, members of People’s Defense Forces including local PDF are helping victims and putting out fires.

Military council forces were not only burning villages as a threat but also attacking people until they abandon their villages, he said.

People from burned villages are empty-handed because situation there is not stable for cultivation this year and the storage of previous year has been lost to the fire. On 1 May, around 180 homes in a village in Khin-Oo Township were burned and about 500 baskets of rice were lost to the fire, said a villager.

“We lost everything. We couldn’t figure out because we lost everything”, he said disappointedly.
Domestic media cannot cover everything because there is so much news about daily fighting and losses in Sagaing Division. As a result of internet cut in the Division since March, information flow is very slow. The blow of military council is so harsh that it is very difficult for revolutionary forces on the ground to post photos on social network, let alone to broadcast live or to distribute video evidence.

Although revolutionary forces are getting stronger gradually in rural areas of Sagaing Division, military council is still in control of important cities like Sagaing, Shwe-Bo, Depayin, Kant Balu and Ayar Taw. As military council has turned villages that supported them into Pyu-Saw-Htee villages quickly and create division and anger among local people, supporters of Union Solidarity and Development Party and local defense forces in Sagaing Division became arch-rivals.

In the last week of March, military council awarded over 400 people “Ye Bala” medals, which are normally given by Myanmar Police Force in recognition of capacity. Among them, nearly 70 administrators and civilians and about 100 civil servants from Sagaing Division were awarded “Ye Bala” medals. Some of the award winners had been killed while working for military council.
Military council publicly said that it had formed people’s militia groups with its supporters and armed them.

Military council forces, which had not succeeded in its operations in Sagaing Division, armed Pyu-Saw-Htee villages with heavy and long-distance arms and tried to occupy areas controlled by local defense forces, a member of Khin-Oo Township People’s Defense Force told People’s Spring.

For instance, military is stationed at Pyin-Htaung, Ywa-Thit-Kone, Ma-Daung-Hla and Ma-Gyi-Tone villages in Khin-Oo Township and is giving military training. Based in those four villages, military burned over 20 villages and over ten thousand people had to flee and could not go home yet. While National Unity Government and other groups are not ready to give enough support to those victims, military council is raiding and destroying villages every day.

Since November 2021, military council has threatened in some areas in Sagaing Division that some villages would be turned into a collective one. Last year, military dropped propaganda letters by plane on Yin-Mar-Bin and Ka-Ni along Chindwin River in which the military asked “Do you want to see your towns and villages destroyed?” and threatened to build a collective village. In Htee-Cheint where defense was very strong, military threw threat-letters from plane. Terrorist military is trying to turn scattered villages into a big one so that it can control before the rainy season sets in, said a member of Yin-Mar-Bin PDF.

In northern townships of Sagaing Division, NUG (National Unity Government) has been establishing battalions as No (1) military region with the support of Kachin Independence Army (KIA). Joint attacks by these two groups which started from Ka-Thar, Kaw-Lin and Kyun-Ha have spread to Pinle-Bu and Kant-Balu.

Offensive in the rest of Sagaing has been led by armed forces of majority Bamars, students-led troops and local defense forces. Hundreds of young people graduate from military trainings every week in townships in Sagaing Division.

But only a few groups have been fully armed.

Monywa People’s Defense Force (MPDF) under NUG has been fighting in the form of battalions and companies but they have not reached the strategic level. A member of Monywa All Burma Students’ Union pointed out that National Unity Government had to negotiate political agreements to full extent in order to get massive support of ethnic armed organizations (EROs).

“One thing certain is freedom of Bamar nationals cannot be achieved by Bamar forces alone. They will become exhausted in the long run”, he said. By experiencing their own troubles, people from upper Myanmar can now sympathize with the hunger for freedom by other ethnic people, he added.
Because the military council launched its offensives mainly in areas of small PDF forces, majority of ill-equipped village defense forces and people’s defense forces became front-line troops.

Terrorist military normally raided and destroyed weak villages and stationed their troops there so that they could move around easily. Military raided a PDF military training at Padat-Htine village in Myinn-Mu Township in February and brutally killed 11 people. Stationed at Padat-Htine village, military burned nearby Malae-Thar and Nyaung-Pin villages in Ayar-Taw Township in the first week of May.

Although terrorist military council forces have been putting local people and revolutionary forces relying on the people into big trouble, villagers were not afraid and helped each other, said a leader of Depayin PDF. He is one of the five leaders of Depayin Township People’s Defense Force.
People from nearby villages took care of those from burned villages as if their own families and thus they were living through the bad time, he said.

“(The military) is now crushing groups like ours which are ill-equipped or armed with only homemade weapons. Real fighters and real troops haven’t come down”, he said. “Many of their people had been killed by ill-equipped groups”, he added. According to members of local defense forces, people and revolutionary forces should focus on and help Sagaing Division which faces destruction by terrorist military every day.

On the other hand, hard spirit of local farmers is the hardcore trench of Sagaing Division. Instead of getting depressed when their villages were burned down, many people with deep resentment joined the revolution, a member of Khin-Oo Township People’s Defense Force told People’s Spring.
After the military burned his village thrice, over 90 homes were burned down and people were rebuilding their houses with whatever woods they could get.

“I’m sure only a few people would grow paddies in our village this year. We have more people who will fight”, he said sarcastically.